It doesn’t happen as often as many think, but if you are a frequent hiker in Arizona, you will likely encounter a rattlesnake from time to time – even on the most public of trails.  And as I am often wandering around somewhere, the odds are pretty good I will meet up with one.  And I did this past weekend.

Growing up in the Midwest, the only exposure we had to the Western diamondback was of course, television and the movies.  If they showed a rattlesnake, it was going to be angry, curled, tail a “rattling”, and ready to strike.  I have had numerous encounters with them now (enough where I’ve stopped counting) and sometimes this is how it happens.  Particularly if they get surprised (technically, both of you get surprised!).  ALWAYS pay attention to the path!

The Western diamondback seems to like to spread out on a semi-smooth, less rocky, flat piece of land, which, coincidentally, looks a lot like a trail!  My guess is that this guy (I didn’t formally check) was just getting ready to warm up with the rising sun, as the nights have been starting to be a little cooler.

Even though I’ve seen quite a few, I always like to stop and take some pics or a video.  Along with the saguaro, there is just nothing more iconic to the Sonoran Desert then the Western diamondback, and he allowed me plenty of time to take some photos.  Although scary to many, they are amazing to see (and hear – you know what I mean).

Based on the number of “rattles”, this was one of the oldest snakes I’ve seen.

And while leery of me being there, he apparently didn’t feel threatened

This trail is frequented by bike riders, and as a group approached, the snake was “encouraged” to leave the pathway – no one wants him getting run over (this is common) and getting hurt.

I’m going to hide behind this weed

He never did give the”rattle” – it looked almost like it was to much of an effort to wield it.

He slowly moved out of harms way under the nearby cactus.  It makes you think of all the snakes that have quietly sat there as you walked by.

The funniest thing is that I didn’t get that “startled” feeling when I spotted him, but half an hour later was scared by a stick lying well off the trail. 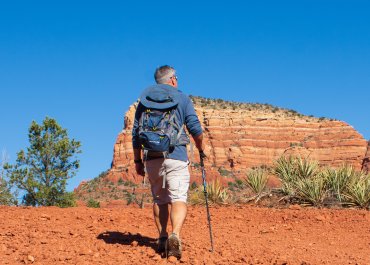